Then the Bunny Goddess Said Join me Join me Down my Rabbit hole! “she bolted dragging you along to the twisted world on the other side of her rabbit hole. A world of fantasy and whimsy. A world of gritty things! A world with twist and turns. A place with surprises and things to fear. The Goddess did drag you behind! Then she grinned as she hopped hopped up on the bus. Her smile turning into a Cheshire grin.” Hello there plaything she giggled nibbled! I see I see you come at last but no time for the weary no time no time last! She gave a playful purr before hopping back down and looking around running off once more leaving you in the twisted world of her dreams.

What’s the Goddess Bunny wearing in this twisted reality that exist but doesn’t! That’s simple she will tell you all about! “Giggles”

Goddess wishes to start with her skin! This is something new and something amazing she found at the Skin Fair that opened today!! At 12am SLT. This particular skin was by The Sugar Garden and was named Cici! This is a extremely cute and very amazingly done skin! The tones and textures used where extremely nice and goddess ended up picking this skin up in two different tones! One being X tone and the other being C tone. This skin does include a number of extra’s with it! Including a bento shape designed for the Catwa Catya head. There also a eyebrow included! Which is a nice touch because with the new bento heads eyebrows can sometimes really make or break a entire look! Then the final piece it comes with is system skins for the body incase you wanted or need them for anything!. This is a pretty rounded out full package for a head applier! The applier itself is designed for the Catwa Catya head but is omega and could be used on other heads! The picture above I am wearing the Catwa Catya head and the included shape. I was not wearing the brow thought! I am currently using the applier on the New Catwa Lona head with another shape and it looks spectacular! Overall this is a extremely nice and impressive kawaii skin that is worth taking a look at!. That comes with a number of desirable extras including a shape!

The outfit itself is from Le FormeLe Forme and its called Killer Outfit. This outfit is currently exclusive to the We!<3RP. The first thing I thought of when I seen this outfit my self was post apocalypse. It has a very gritty dirty urban combat feel to it! It feels like something someone from a end of the world event would be wearing. The texturing was superb and the attention to detail was amazing! The only small nitpick I would have is I wish the gun on the hip was more rigid! It’s a prop it’s perfectly rigged but a bit more rigidity would have been nice! Other then that one little nitpick this was a extremely lovely outfit and totally worth going and having a look at! This would fit well in so many environments or as a edition to your halloween wardrobe. I could also see it being used in police/fire rescue type RP where you’re rescuing someone. When it comes to RP elements this outfit really does bring a massive amount to the table and is worth having a look at.

Another item you see Goddess wearing is the .{PSYCHO:Byts}. Holster Flask this came from the event Suicide Dolls! Its a pretty fun piece to play around with! The only down side to it is there is no Maitreya rigging or size! Thats right no Maitreya rigging or size! My guess is most likely the creator was unable to get a rigging kit! Though it does include sizes for Belleza, Slinks, and TMP.. so it does have the majority of body’s covered. The fit on my Belleza body was flawless and so was the fit on my hourglass body! I was very pleased with the quality of the fitting! The unrigged also fit fairly well!. As you can see with a bit of tweaking and playing the unrigged sizes can be made to fit the Maitreya almost perfectly. There was a minor bit of gap around the leg that sometimes happens with mesh belted items! Other then that the attention to detail was outstanding! The quality of textures where some of the best I have seen! I was extremely impressed with how well created the flask was! It was perfect and something that will see use! With my other bodies and most likely my Maitreya body also! This flask is really worth checking out!

I hope you have enjoyed our reviews and really sorry this took so long to publish a bit of real life hiccups have slowed meh down but will not stop meh! I enjoy what I do far to much! So until next time Bunny goddess out! Also be careful of the bar down the road! Place can be a bit rough and tumble “giggles” until next time my readers! “Hugs”

END_OF_DOCUMENT_TOKEN_TO_BE_REPLACED 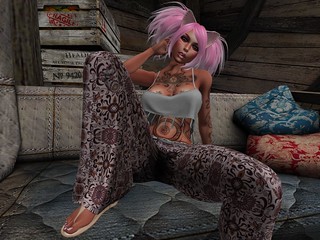 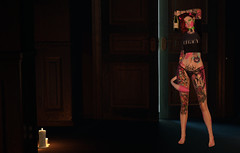 The Purrfect Corner of a Kitty Goddess